It’s taken me a full month to get prepared for the CCIE labs – and subsequently a full month to start studying. A whole month is a lot of time for extra learning, cramming and exam preparation, but it shouldn’t come to effect me too much – but now its time to roll.

The physical lab has been altered slightly to accomodate for the hardware and GNS setup. It is still based on a mix of physical and virtual equipment in the topology outlined in the Cisco CCIE R&S v4 Practice Lab 1. Unfortunately the 3550’s don’t support auto MDIX like the 3560’s do, so new 0.5M CAT6 cross over cables were purchased to cable the switches together.

Logically I did want to run a seperate management VLAN over the switches to get telnet access to them and save on cabling costs, but I’ve scrapped that idea due to possible issues in killing a switch or vty sessions whilst being remote. The only physical change this has caused is the purchase of new console cables (hardware specs further on).

The GNS3 box has been configured up and is running happily. Instead of forking out ~$900 for a new i7 box I’ve reused an old AMD x2 I had lying around. The only parts I needed for this was a new case, PSU and DVD drive, so I opted to try this first to keep costs down in the interrum. If the X2 (with mobo limited to 4gb) can’t handle the GNS load I’ll have to invest in a new i7 down the road (which wouldn’t be too bad as it could multitask as a F@H client when not being used) but for now were with the AMD. 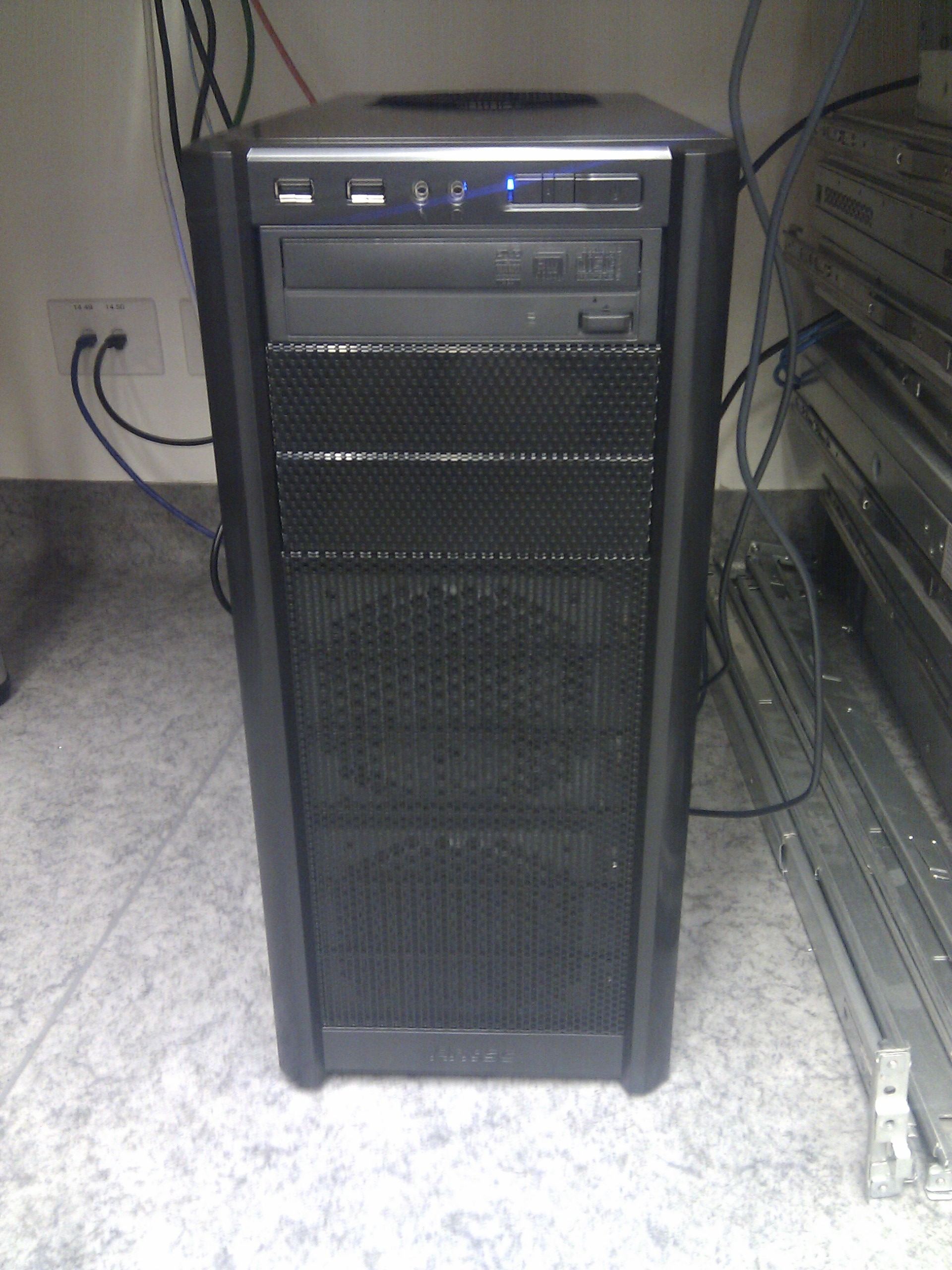 As for software – I’ve got everything running inside Ubuntu 11.04 x64 Desktop. I wasn’t sure how external hypervisors linked to a trunked NIC work in GNS3, so I didn’t opt for the server version and instead I’m running GNS on screen. If I can figure out external hypervisors I may change this but for now it’s working well enough. The DGE-530TX worked out of the box with no special driver support needed and the vlan and 80211 packages are happy enough on top of it.

As many threads on the net suggest – GNS needs root permission in order to bind the Linux Ethernet NIO needed for trunk access. Both sudo and gksudo works when launching GNS, but I lost all the pretty skinning and icons – so I’ve logged in locally as root and running GNS from roots x11 session. This is definitely not best practice especially for boxes with internet accessible remote access, but for me this thing is only doing GNS so security issues don’t phase me.

As for console access I’m running 7 Astrotek USB to Serial Converter (205153). This seems to be detected natively however I forgot to check the dmesg output and loaded the prolific pl2303 driver anyway. The devices successfully register as /dev/ttyUSBX and my original thought was to use socat to bind a tcp port to the tty device. This worked to an extent. I’ve played a fair amount with the socat raw device options, but whatever I tried socat still liked to put double crlf and crnl at the end of lines. The major pain in this was I could not do a show run as the ouput was killed by the second crnl. For anyone interested in what I was trying with socat:

The rest of the software setup is pretty generic, I’ve just used tutes from googling on anything I’ve got stuck on regarding linux+GNS3 but the install and configure is pretty straight forward.

Below is the outline of the topology I’m working with. This is a just a physical overview except for the L2 logic when GNS becomes involved. 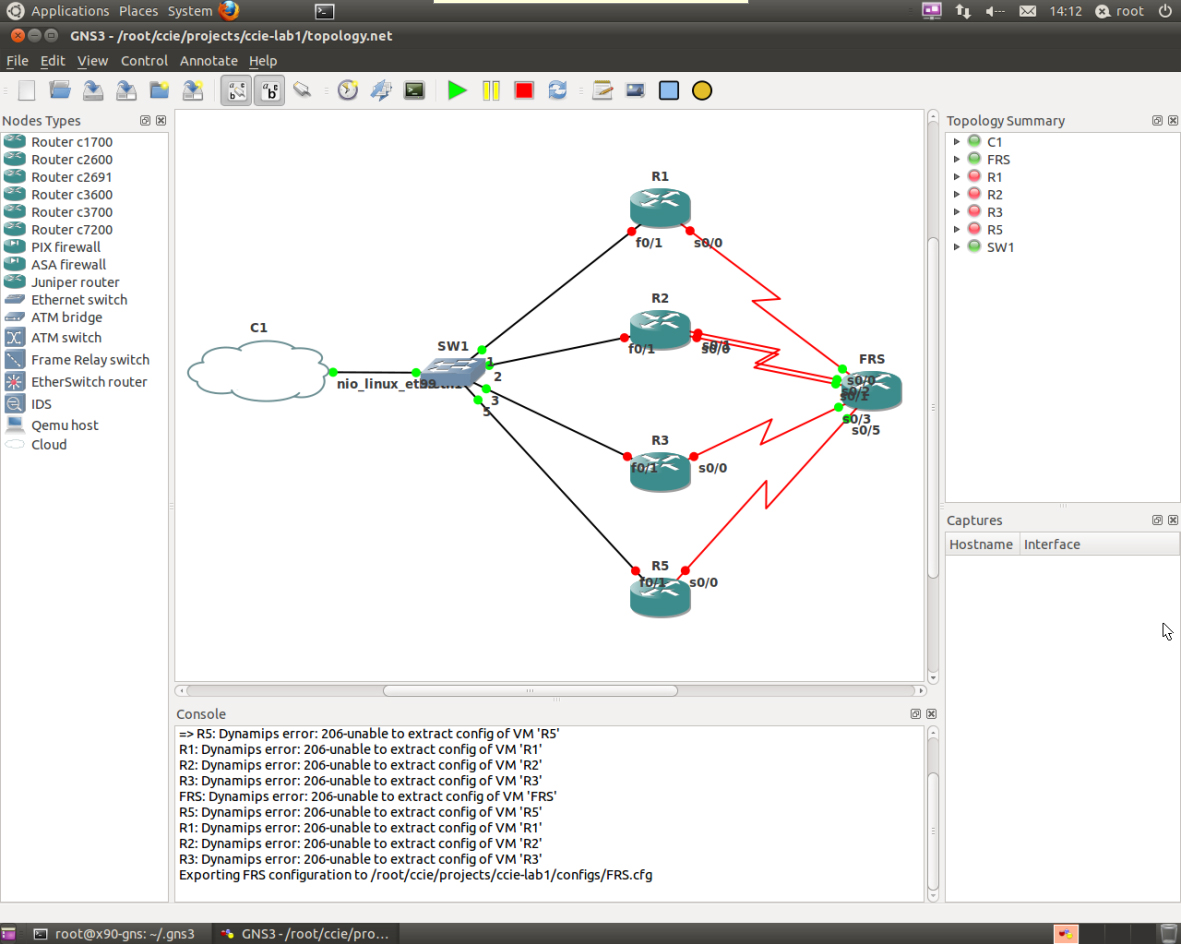 I’m sure that cost is set to rise, especially if i hit a hardware barrier with either my GNS PC or running the 3550 switches.

I’ll be posting config examples that I’m using to connect everything up and just general rambling on the subject. Keep posted.